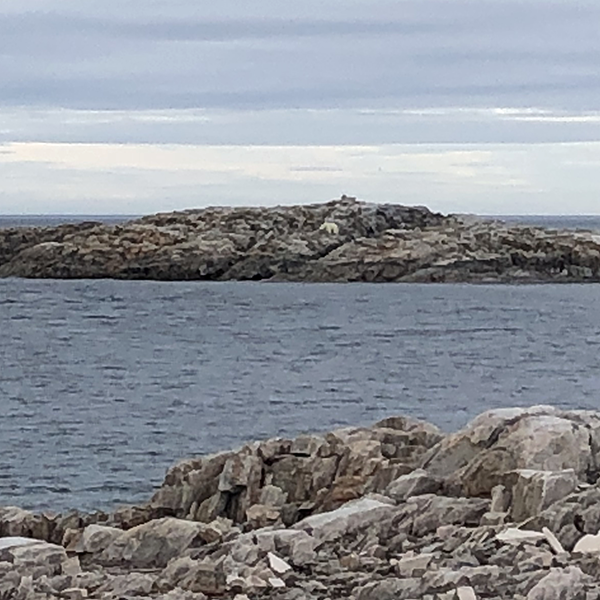 We were exploring an area near a mostly-destroyed Swedish cabin, about a 15 minute walk from the landing area, where we’d left our life jackets. I’d been doing some writing in a quiet area when I was called back to the centre of the area. There were a few islands near the chunk of land that we were on, and on the furthest one (which was also closest to the life jackets) was a polar bear.

The guides quickly gathered us and made a game plan. A zodiac was dispatched to retrieve the life jackets, and they found a tiny inlet (basically the width of a zodiac) where they could land to pick us up. We gathered our things and quickly prepared to leave.

Meanwhile, the bear had been slowly moving, swimming from island to island towards us.

We loaded up the first zodiac, prioritising those with the most equipment. The plan was to send us all back in 2 zodiacs (rather than the usual 3), so each of them would be packed. The first, weighed down by sheer numbers, got a little stuck on the rocky beach and had to be pushed out. By the time we started loading the second zodiac, the bear was in the water again, except now there weren’t any more islands between it and us. It swam to the right of the inlet that we were in, and then turned to swim across the inlet: across our escape path.

In the middle of this swim, it paused, turned and considered us. Kristen (one of our guides) had a flare gun raised, ready to scare it away if need be. It lowered its head, and continued swimming, completely out of view. We finished loading the Zodiac, freed it from the rocky beach (as it inevitably got stuck with the heavy load), and were off.